It’s been a while. Here’s another in my long-running, sporadic series of not very amusing drawings. Should be producing them more regularly now that I have a job with more meetings.

Drawn on the back of some old notepaper. I could not be bothered cleaning this one up.

Some blokes have physics on the brain.

Brexit vs Remain: A comment from a distance, or: Another reason for compulsory voting (or at least compulsory turning up)

Apart from the many ramifications of the result, surely one of the most interesting lessons of the UK vote to leave the EU is the way young people voted overwhelmingly to stay, while the vote to leave got progressively more dominant as the voters got older.

The key graphic is this one: 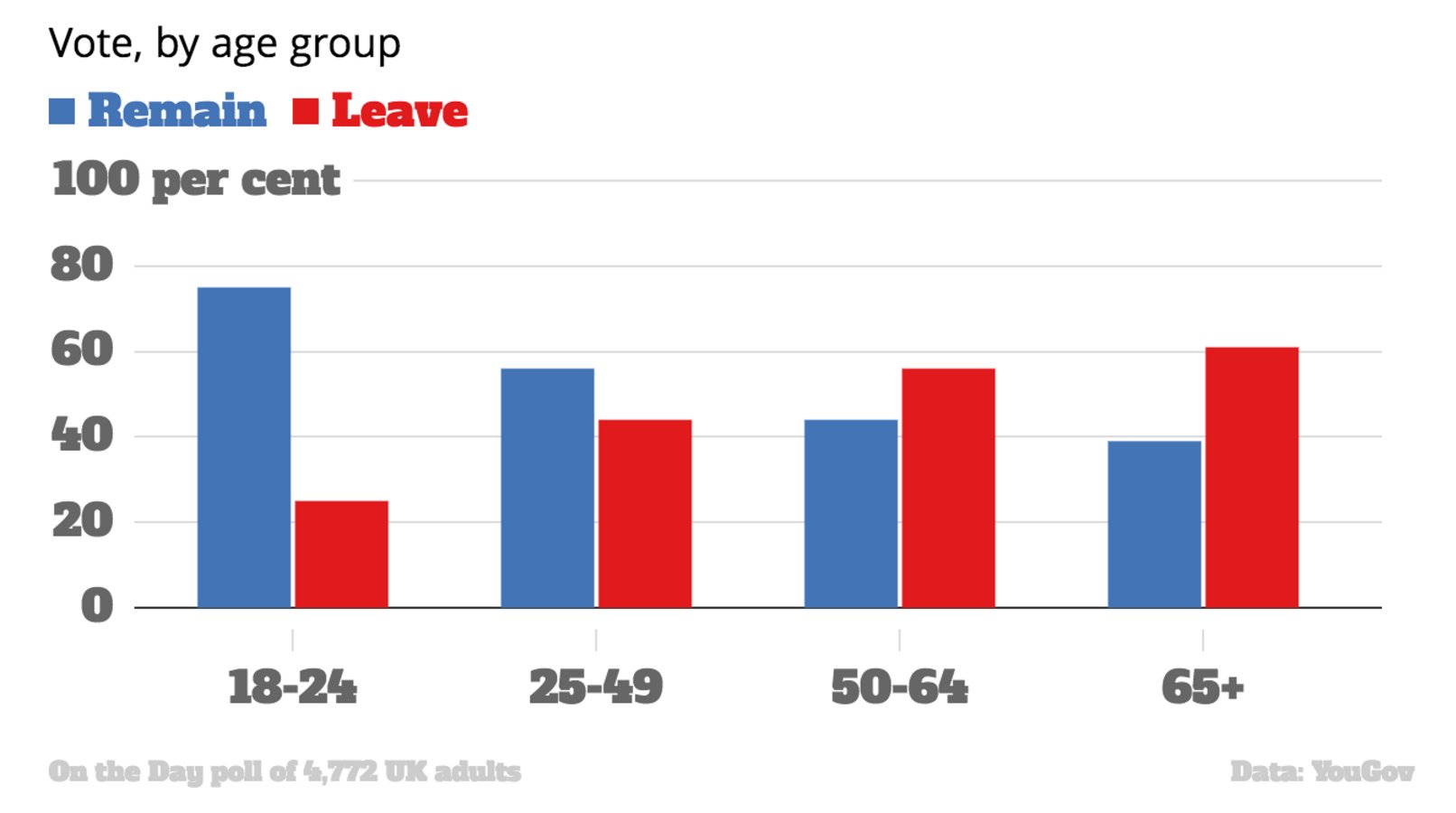 Remain/Leave as a function of voter age.

Some questions come to mind; what fractions of each group voted? As far as I know, voting is not compulsory in the UK, and voter turnout varies with age. It turns out only about 36% of the youngest category voted — so the apathetic got what they deserve, which is to say exactly what they presumably did not want.

But there is the deeper question of the working of democracy. Now, we can’t really go away from all votes counting for ‘one’, yet, but it is true that votes are already not equal. Not all districts have the same number of electors. In Australia all states get 12 senators, even though Tasmania has about the same population as Newcastle and Wollongong combined, and those two cities do not get 6 senators each. We already fiddle with the votes for historical or woolly ‘equity’ reasons.  We talk about ‘positive discrimination’ in the workplace; how about at the ballot box?…

…yet is is easy to believe that wealthy, established, retired people are perhaps not going to be strongly motivated to vote in ways that will benefit the nation as a whole in the long term as much as younger people who are going to have to live and work in the nation long term.

We are seeing its influence all about us, in all the western democracies with aging populations. We see it in Australia where changes that might make it easier for younger people to buy homes or get an education get stymied by the vested interests of the investment-property owning classes, who didn’t have to pay for their own university degrees but who don’t want to contribute to anyone else getting a leg up either. Well, that’s a gross generalisation, but then, isn’t that another name for ‘democracy’?

Maybe one good of Brexit will be all the young voters who now realise they should have got off their arses. In Australia we have compulsory voting (or, at least, compulsory turning up to get your name crossed off the roll — you can still choose to disenfranchise yourself after that by putting an empty paper into the box, so there’s no real loss of ‘freedom’, except the freedom to not take part at all) — I wonder if the Brits are thinking about implementing that now… Forcing people to choose apathy looks smarter and smarter all the time.

Turns out this was in a Red Dwarf episode.  So I’m not original but at least I’m in good company.

Maybe I could use the same drawing with a different caption?

“No, really, this is a standard treatment for acne.”

“You’d be surprised what a shot of ethylene glycol directly into the pancreas can do.”

“Well, no, I’ve never done exactly this procedure before.”

“I have a bigger one if you’d prefer.”

“Don’t worry.  The utility of the neocortex is wildly overstated.”

A page from my notebook

Sometimes it’s fun to just sit down with a pencil and let your mind wander.

Some drawings, inspired by feeling like I ought to be doing something while I was sitting glassy-eyed in front of the cricket.

So this image is an A4  page from my home-made notebook.  I found a comb binder in a dumpster years ago — one exactly like the one in this video. When I want a notebook I just bind a bunch of sheets of printer paper.  I like the lack of lines.  I like the ‘trivial’ nature of a cheap, home-made book.  Somehow I feel more free to experiment and waste paper when the book is so ready made and cheap and easy and replaceable.  Someone gave me a really nice book full of art paper once, and I can’t bring myself to use it.

The drawings here are pretty much as they came.  I did some erasing in the first one (top left) but it is pretty clear that for example the bottom left began as a picture of a bookcase, for no reason, and the ‘joke’ (such as it is) was just crammed in when it came to mind.

Only the one in the bottom right had any text in mind when I did the drawing.  The ‘joke’ (I always use inverted commas when I say that) was based on the middle bottom, which was just a random image — in this case, flowers in a chemistry flask.

Top middle was just me attempting to draw a bald guy.  Why a cake, I don’t know.  Top right started out as an attempt to copy Wal’ Footrot’s nose.  Badly.

That will be all.

Am I Being Told to Shut Up?