A little fix on a Hermes 10

I tackled it two ways, both at once, so I don’t know which was more important.

First, I just very lightly lubricated the various bits of the mechanism, working from the ribbon position all the way back to the various lever arms and whatnot near the keyboard.

Now, in most manual typewriters the vibrator is not symmetrical — it’s operated from one side or the other but not both, so such an arrangement would not be that much of a surprise. But on the 10 the mechanism is more symmetrical, with levers and rods on both sides and the ribbon holder moving perfectly vertically on a rail rather than being lifted up by a lever arm from one side. So it seemed reasonable that there should have been a spring on the left, especially since there was a little pin there with nothing to do but hold the end of the absent spring.

The mismatched spring I added to the mechanism on the top-left.

To cut a boring story a little short, I found a little spring in my parts bin (not matching, but that’s OK) and attached it, and an the problem went away.

The 10 is not a bad machine. It combines the evenness and regularity of an electric machine with the satisfying thwack of typebars on paper. Its gentle hum is not disturbing. It is a heavy beast — portable only in the sense it is not bolted down — and the key tops sit high due to the electrical paraphernalia underneath. But typing on it is effortless and the result is very tidy.

Here are some more pictures. 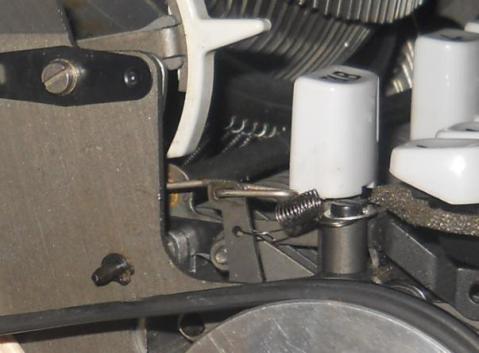 Some more pictures of the topless Hermes 10.

It certainly isn’t the most invisible fix I’ve done, but it works and makes the machine much more user friendly, so worth doing indeed.

I'm a scientist by training, based in Australia.
View all posts by Darren »
« Previous post
Next post »

This site uses Akismet to reduce spam. Learn how your comment data is processed.